NAISA's 20th anniversary edition of its SOUNDplay festival continues to serve artists and audiences alike with an experimental platform for encouraging new avenues of exploration between sound and new media.  Featured this year is programming on this year's theme Digital in Nature with an in-person exhibition by Julia White, as well as online screenings, performances and artist talks with Laurel MacDonald, Phil Strong, Véro Marengère, Tansy Xiao and Ben Donoghue.

"NAISA's programming theme of Digital in Nature is explored and expanded upon by the artists in this year's SOUNDplay Festival with works that examine relations between human and non-human worlds, perceived and invented reality, as well as human-made and organic phenomena. Like last year, all of the works presented this year include an online element in one form or another, allowing for audiences to attend from wherever they happen to be." — Darren Copeland, Artistic Director, New Adventures in Sound Art

SOUNDplay opens with WATER Shadows, an in-person exhibition at the NAISA North Media Arts Centre in South River of sound sculptures by Julia White that celebrates water.  White refers to the audience experience of her exhibitions, "as a 'water temple' complex of steel sculptures wrapped in discarded bicycle inner tubes that one moves through, (while) a unique sound mix is made blending water-recordings."

Visitors to the exhibition are invited to participate in WATER Shadows by recording a personal celebration of water that will be shared online as audio in the Web Water Portal: https://JuliaWhite.ca/web-water-portal-NAISA/.

Starting October 7 on NAISAtube (https://www.youtube.com/naisatube) explore a new collection of videos from past NAISA performances from different periods of NAISA's 20 year history.  A highlight among these is Laurel MacDonald's and Phil Strong's impassioned Videovoce performance from 2012, which is also featured on a November 6th online screening along with a new livestream performance by MacDonald called I Eat the Stars, inspired by poems by Rebecca Elson.  To attend the screening register in advance at https://www.naisa.ca/purchase-tickets/. The $10 admission fee is optional.

On November 20 a screening of new media artworks by Tansy Xiao from New York and Véro Marengère from Montréal explores relationships between humans and nature. Tansy Xiao's Bone and Air is inspired by juxtaposing sounds of bone conduction (within the human body) and air conduction (receiving sounds via the ears). The video also invites audience members to add vocal sounds conducted by specific images in the video. Roserade by Véro Marengère is a videomusic work that in Marengère's words, "is sometimes frenetic and sometimes contemplative, and it proposes a world that deforms without ever completely destroying or building itself." Like the Nov 6th screening, advance registration is required (https://www.naisa.ca/purchase-tickets/), admission fee is optional.

From December 6 to 20th, SOUNDplay audiences will have exclusive access to a special online adaptation of the 16mm feature-length film from 2017 by Ben Donoghue called Pierre Radisson: Fjord and Gulf. The slow observational style of Donoghue's film places the viewer inside the daily activity and environment of a Canadian Coast Guard Icebreaker, providing a window into the invisible labour underpinning the Canadian economy. As Donoghue describes it, "the film brings the deep winter landscapes of coastal Quebec into dialogue with intensive industrial activity of ore shipments from the mines of the Saguenay – Lac Saint-Jean. The film embraces context, giving duration and breath to the images and sounds of the journey."  On December 11th, join Ben Donoghue for an online artist talk to learn more about the film.

New Adventures in Sound Art is a non-profit sound art organization in South River Ontario that is funded in part by the Canada Council for the Arts, the Ontario Arts Council and the Department of Canadian Heritage.

Where:  NAISA North Media Arts Centre or online at https://www.naisa.ca/

$10 admission for online programming is optional

Back
I Eat the Stars by Laurel MacDonald & Phil Strong

This performance launches a two year program of new works by Canadian media and sound artists developed in celebration of NAISA’s 20th anniversary. In this YouTube livestream performance of I Eat the Stars (hosted with audience discussion on Whereby) Laurel MacDonald continues her exploration with video-music with settings of poems from Rebecca Elson’s collection A Responsibility to Awe. The performance will also include a screening of Laurel MacDonald and Phil Strong’s Videovoce performance from 2012 which is part of the NAISA 20th Anniversary video collection on YouTube

For her new concert production I Eat the Stars, Laurel has set several poems from A Responsibility to Awe, a book of poetry by Montreal-born astronomer and poet Rebecca Elson (1960–1999). MacDonald says: “Rebecca Elson had an extraordinary power of intellectual and creative imagination in each of the dipolar realms of science and poetry. She recognized the intrinsic link between these realms - that each is essential to and inseparable from the other, as together they define and celebrate the entirety of the human psyche. With I Eat the Stars I am very honoured to be working with this exquisite poetry, endeavouring to express its complex and joyful ideas through my music and visuals.”

I Eat the Stars is the first solo concert production from Laurel MacDonald in over eight years, and will have its full-length premier as part of the 20th Anniversary edition of the NAISA SOUNDplay Festival. 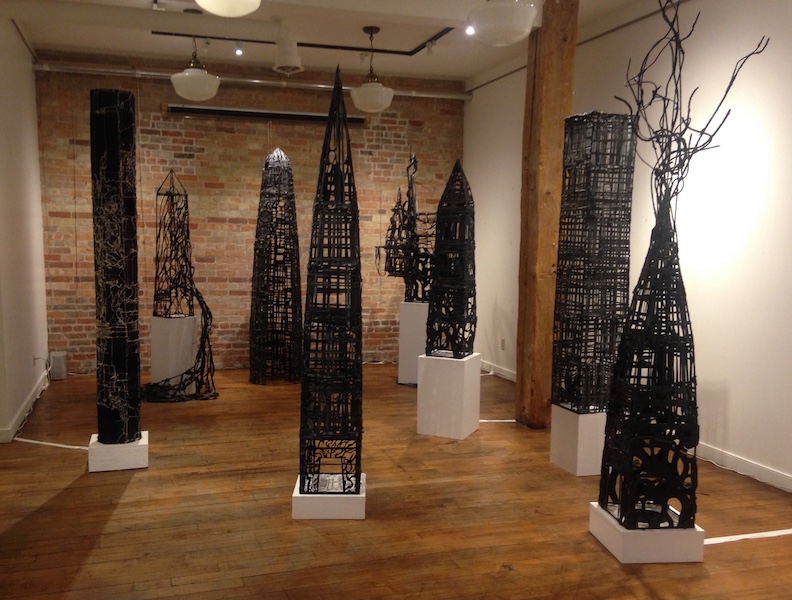 I Eat the Stars by Laurel MacDonald & Phil Strong

An online performance in celebration of NAISA's 20th Anniversary

New media artworks exploring the relationships between humans and nature